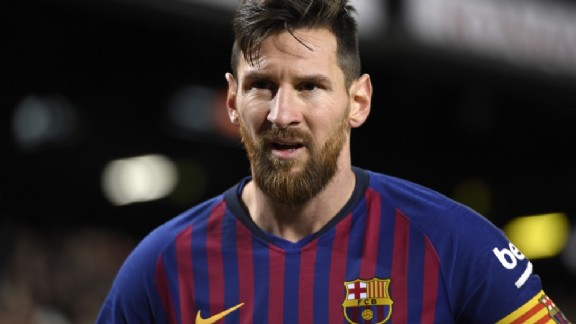 Biases are closely related with the expectations that form an important part of the brain. The brain has basically two systems: one to process sensory data and one our process our expectations. Knowledge and skills are stored in the brain through associative learning and instrumental learning. These learnings can best be described as a model of the world. In football terms: players learn technique (instrumental learning) and game intelligence (associative learning) and create a model of the beautiful game, of their team, their teammates and themselves. Based on this model the brain calculates what it expect to sense next.

This is the reason why players who have less game intelligence than average literally don’t see opposing players or the ball. The manager might ask himself: “How come that my defender didn’t see that attack coming?” The answer is: the ray if lights of the attack did reach the eyes of the defender and were processed by the brain of the defender, but because the defender did not expect the attack to happen the sense data was overruled because it conflicted with the expectations of the brain. As a result the sense data of the attack was deleted and the defender literally didn’t see the attack happen. That is the reason why an attack with little predictability has a better chance of success. If the unexpected happens, players with less game intelligence than average, will fail to see patterns developing.

Another example of how expectations and implicit biases work, is when a manager after a few years of doing great things with the team, suddenly is unable to influence his players anymore. Most of the time this happens when he wants to change the system he is using because the results are less than satisfactory. But no matter how much he tries to explain his new ideas to his players, it seems as if they don’t listen to him. In fact, they literally don’t hear the new things he is saying. Instead they hear what they expect him to say. This is one of the reasons why Louis van Gaal has a reputation of doing weird stuff in the locker room. When he feels he can’t reach his players, he does something completely out of the ordinary to shock the players so they stop prioritizing their expectations and instead let their sense data through.

The most common biases

So now that we have seen the underlying structure of biases, we can look at the most common biases:

The reason is that confirmation bias is so much built in the way the brain works, that conscious understanding is simply not enough to get rid of it. It is an unconscious process. The best way to countermand confirmation bias is the use of statistics. But only statistics that shock you now and then. Because if you do not strongly disagree with your statistical data, chances are that you selected that data source because it confirmed your biases.

We all love Messi. Let’s research how Messi learned to play football so well and apply those lessons to all other players. Sounds like a great idea, but the idea suffers from survivor bias. Maybe Messi’s development is a lesson for many, but as long as don’t know how many players tried to do the same and failed, we don’t know whether the path Messi took is any good. Theoretically it could be that only 1 in 100.000 players actually learns to play football at a professional level following Messi’s development plan.

In football many people suffer from survivor bias because a lot of attention is paid to players who make it. We all love a positive story. But the negative stories of players who did not make it, are at least as interesting, if not more. Focussing only on the positive is called the Via Postiva, the positive road. Many people prefer to take that road. But the Via Negativa, the negative road, is in many cases more important.

Another example of survivor bias happens in data scouting of players. If a player breaks through, data scouts start looking in the history of the player, to see whether there is a specific pattern that already signalled his greatness years earlier. The idea is that if this pattern is recognized it can be used to find future talent. But often, the data scout is uncareful with how many years he goes back. For player A he finds a pattern three years ago, and then he confirms his find for player B, even though he has to go five years back. So here you see both Survivor Bias and Confirmation Bias at work at the same time. Even worse, the data scout never looks at how many failed players had the same pattern.

Belief in truth in itself is a bias. If you would define bias as a systematic deviation from the truth, even though you are trying to recognize your own biases, you fall for the belief in truth bias. Truth can only be defined in formal logic and mathematics with the use of truth-tables. There is no truth outside of mathematics and logic. Everything empirical has some measure of uncertainty.

Habermas, one of the most stern supporters of truth outside of mathematics, defines true statements as statements that will hold up for everyone, everywhere and always. That means that if something is true, it is true for us and it is true for people living in Australia. It is true for everyone who will ever be born from this day forward. In fact it is even true for everyone who has ever lived so far. If aliens from outer space visit our planet, then they too will recognize a true statement as being true. While this holds for mathematical and logical statements, it fails for empirical statements. The bar for truth in the empirical world is too high.

Nor is truth needed in the empirical world. Probability gives you everything you ever wanted out of truth. Rather than saying that X is true, it suffices to say that X is highly likely. The self defeat tests of Bayesian statistics allow you to define bias much more elegantly. A bias is a probability estimation that leads people to systematically lose bets or gain unnecessary penalty points in a loss function.

Business Insider has a nice overview of 20 biases: 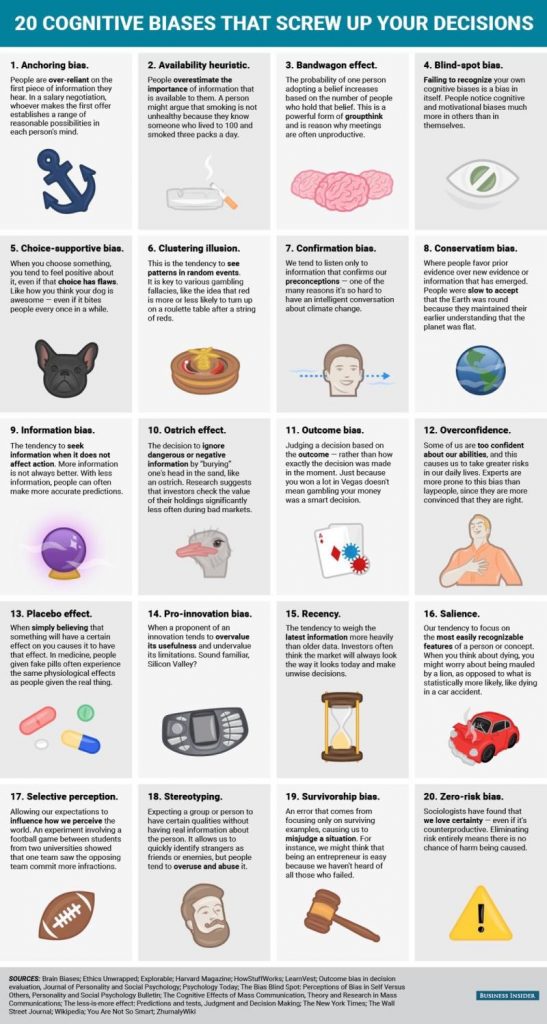